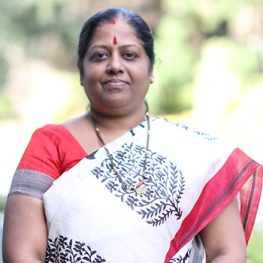 Dr.K.N.Shanti  has a Master degree  In Biochemistry from Osmania  University and Ph.D  in Immunology from Indian Institute of Science, Bangalore. She has a very strong academic record being a distinction student throughout and a gold Medalist both in B.Sc and M.Sc. She was awarded a gold medal  for the best Ph.D thesis at Indian Institute of Science .She was also conferred a Gold Medal and Young Scientist award at the National level By The Indian Immunology Society. Her Ph.D work on “Identification of Tropomyosin as the major shrimp allergen and characterization of its IgE binding epitopes”  has been regarded as a land mark contribution which was cited both by National Media and also by New York Times, USA and National Institute of Health, Washington, USA.

She is a Life Member of Academic Bodies like Indian  Immunology Society, The Indian Science Congress,  Society of Biological Chemists and Indian Society of Technical Education. She has vast teaching, research and administration experience of over two and a half decades. She has guided many graduate and  post graduate  students in the field of Engineering, Science and Pharmacy. Currently she is guiding 5 Ph.D and 2 M.Sc (engg)  students. She has several International publications  with high impact factor to her credit. Her areas of research Interest include Immunology, Phytochemistry, Biopharmaceuticals, Biofuels and Phytoremediation.

Advanced Linear Algebra and its Applications